“I spent the money at video game arcades. I murdered them so I could steal some money.”

Hiroshi Shimura’s confession to the police after being arrested for withdrawing money from the account of a man found dead in Tokyo last month.

Third-year University student Shimura is now being grilled further about the incident, which resulted in 61-year-old Shinichiro Nomoto and his 86-year-old mother being murdered at their Tokyo home in late January. An investigating officer reiterating the senselessness of the crime by confirming that the 21-year-old student had frequented game arcades for several years; however how much Shimura-san’s Dance Dance Revolution honed dexterity will benefit him in the prison showers, 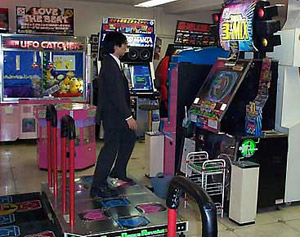 remains to be seen.