With women-only carriages now commonplace in Tokyo, and females far more forthright in regards to revealing offenders, the days of free-for-all furtive fiddling appear to be almost over for Tokyo’s transport transgressors.

That said, where there’s a will there’s always a way, and Tokyoite Yoshihiro Tanabe took to wearing women’s clothing in a desperate bid to cop a clandestine feel; however despite his elaborate efforts, he chose the wrong female to fondle, as Tanabe’s 25-year-old victim overpowered him as the train stopped at a station and promptly handed him over to the police.

During questioning the 51-year-old culprit candidly confessed that his disguise was designed to avoid getting caught, stating, â€œI thought I wouldn’t be arrested because I was cross-dressed.â€

Sadly no photograph has been released, but the middle-aged miscreant is said to have been sporting long hair, which means he may — or indeed may not — have looked something like this. 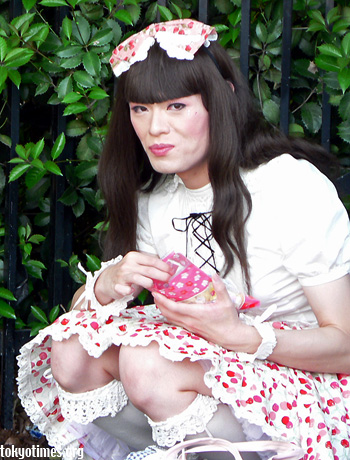