This week saw five people honoured at the Praemium Imperiale in Tokyo — an art prize awarded by the Japanese Imperial House — with honorary patron Prince Hitachi giving gold medals to artist Yayoi Kusama and composer Steve Reich amongst others.

However the Emperor’s younger brother caused something of a stir at this year’s event with his rather unconventional attire and decidedly bold bouffant. 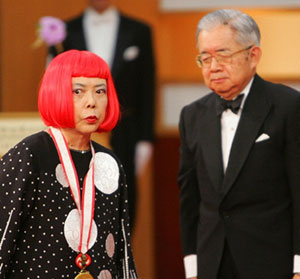