How much truth there is in the much favoured phrase â€œ60 is the new 40â€ is certainly open to question, but if it is considered credible, then where does it leave the Japanese? As undoubtedly the longest living people in the world, could 70 actually be the new 40 in Japan?

In fact for some so-called elderly Japanese, even such a claim could be classed as conservative, with more adventurous activities still being continued well into later life. Take skateboarding for example. Whereas many of their western counterparts may weary of their wheels before reaching 30, Japanese boarders never surrender — they simply support themselves with sticks instead. 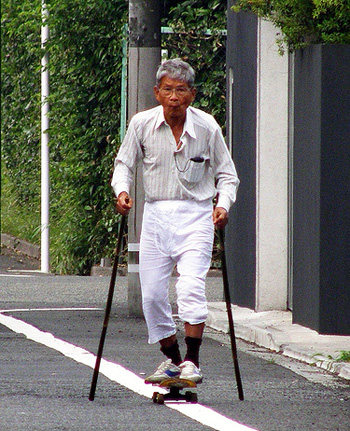 (image from Nero’s great uncle, via the FG forums)