With Japan’s declining population raising fears of a large influx of foreign workers, officials at the Wakayama Electric Railway Company have hit upon a novel way of avoiding such a problem — employ animals instead. An idea that it has put into practice at Kishi Station in Kinokawa by promoting Tama the tabby to stationmaster. 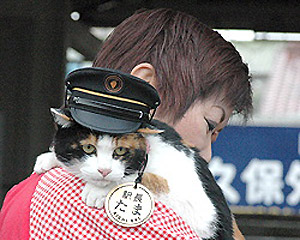 Resplendent in an official railway cap, the 7-year-old Kinokawa native will be expected to welcome passengers, and to avoid any feline-related friction, the two deputy stationmasters are also cats — the three of them being ‘housed’ at the station shop.

A solution that not only helps avoid any potentially awkward cultural misunderstandings, but makes perfect economical sense, as the three officials are ‘paid’ in cat food. Details regarding health insurance and pension payments however were not disclosed.