Whilst spring may be just around the corner, even roadside figures (Jizo) still need protection against the elements. 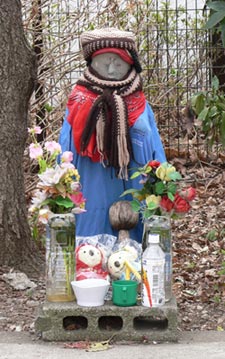 The offered toys however are rather more significant, as a Jizo’s role — among other things — is to watch over the souls of dead and unborn children; the deity having the unenviable task of spending the majority of his time in Meido (the land of gloom) protecting his flock from nearby demons.

Yet perhaps helping to lighten his burden somewhat, the Jizo is also a protector of travelers, and as such, some people believe that lotus flowers spring from the ground wherever he steps. A notion that arguably takes a little of the sorrow from his doleful gaze, and also helps make up for the well-intentioned-but-aesthetically-unpleasing plastic bottle vases.