Last week, 31-year-old Hiroshi Wada was arrested for robbing several convenience stores. Nothing new there you may think, but Mr. Wada wasn’t your average run-of-the-mill thief. No, he had a style all of his own. Much to the dismay of his unsuspecting victims.

In an attempt to gain more time to make his escape, Wada-san always made store workers remove their trousers. Then for good measure unceremoniously bundled them into the bathroom. Providing invaluable time to make a clean getaway, as the embarrassed staff member went about retrieving his/her absent trousers before calling the police.

On the day he was arrested, the crafty criminal had picked up a dumpling (I kid you not) and approached the counter as if to pay, but then suddenly whipped out a knife and demanded the day’s takings. Presumably at the same time as the unfortunate shop assistant reluctantly whipped down their trousers! 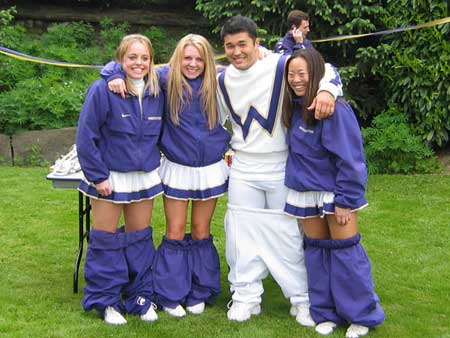 An alleged picture of Mr. Wada reunited with 3 of his victims yesterday. All of whom inexplicably turned out to be cheerleaders.