The hype for Brad Pitt’s (or burapi’s) latest offering Troy, has recently moved into top gear. Or a gallop if you’ll allow me the indulgence of using some equestrian terminology. As below is photographic evidence of the most recent publicity stunt connected with the film. 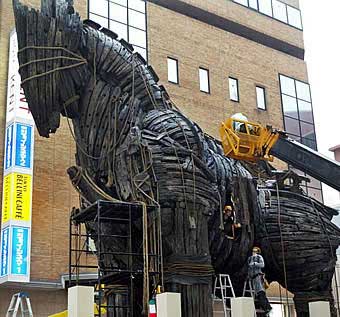 Interestingly though, the movie arrives here at the same time as a potentially historic development between Japan and North Korea. As tomorrow (Saturday 22nd), Prime Minister Koizumi will travel to the reclusive nation to discuss (amongst other things) the release of former abductees family members. A positive outcome could have long reaching and beneficial effects not only on the two countries relations, but arguably on the stability of the region in general.

But what you may ask has this got to do with the movie Troy? Well, there have been whispers (most notably around my head) that the horse pictured above is in fact a gift from North Korea. And I don’t need to remind you what happened in the original story. Hmm, something to think about there eh?

So if the diminutive and bouffanted Kim Jong-Il leaps out of that giant horse on opening night, remember that you read it here first. On the other hand, if in the unlikely event that he doesn’t, just put it down to an over active imagination, and a harmless desire to make this lots-of-hype-about-troy-movie story slightly worth reading.

But hold on, could these be the little leader’s getaway horses that I spied whilst out and about this afternoon? 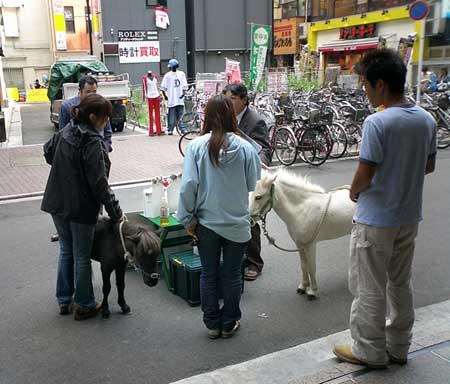