Here is a wonderful picture of Mount Asami in central Japan, spewing smoke up to a kilometre into the sky. 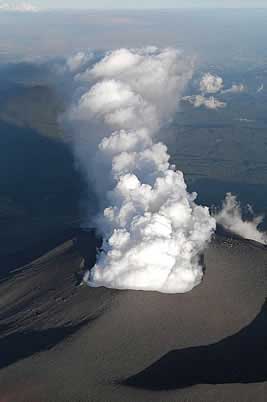 The eruption was classed as small, but still resulted in nearby towns being covered in ash. And possibly more worrying for local residents is that it’s the second eruption in the space of two weeks.

The 2,568-metre mountain is one of Japan’s largest and most active volcanoes, and in 1947 eleven mountaineers were killed after being hit by molten rocks. Yet these recent eruptions have all been classed in the minor-to-medium bracket, and those in the surrounding area can perhaps take some heart in the fact that Asami-san has not had a major eruption since way back in 1783.

Having grown up in England (where volcanoes are just something to stare at it in awe on the TV or in books), seeing this kind of thing happening in the country I live in is just extraordinary. And the events at Mount Asami are by no means unusual either. Japan has a hefty 108 active volcanoes.

This fascination however could quickly turn to fear, as a year or two ago rumbles were felt around Mount Fuji, causing experts to consider the possibility of an eruption. Something that really doesn’t bear thinking about…