Zillions being the number of times (give or take a few) that I’ve been presumed to be an American. Whether it be a casual question along the lines of, Do you have those in America?, or around the holiday period an attempted conversation starting, Are you going back to America?, my foreignness and Caucasian persuasion lead many Japanese to immediately assume I hail from the US.

Now whilst I have to admit it doesn’t take much time (or indeed effort) to set them straight, it can get a little annoying at times. And considering that I dress the English way when I go to work, how on earth can this mistake continue to be made? 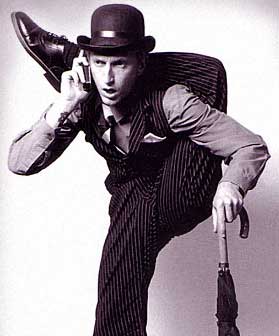 Ok, admittedly I don’t always go to such elaborate lengths when getting ready for work, but I do occasionally make the effort. Yeah alright, that’s not true either. Being caught walking the streets in a bowler hat and a newspaper tucked under my arm would leave me extremely embarrassed to say the least.

But I do possess sideburns. Surely a sign if ever there was one that I’m British.