The once mercurial Brazilian also went on to say that he had no interest in managing a J-League team or (wait for it) the Brazilian national team after he steps down as Japan coach.

Now there is no way I’m going to criticize Zico the player. Nor can I fail to mention the interest he generated in the J-league when he came out of retirement to play here. But as national team coach his record is dismal (despite a good win last week against the Czech Republic), and the improving and confident Japanese team of the last World Cup is now a shambling, directionless wreck.

These recent comments by the once legendary player show a disturbing degree of arrogance and self denial. The fact that he expects to be offered any managerial position after his stint as the national team coach ends is laughable, but to even mention the position of Brazil manager is nothing short of ludicrous!

I guess this arrogance was apparent when Zico accepted the job in the first place. With next to no managerial experience, he was hardly the ideal candidate. Although I have to admit that the JFA deserves as much blame for offering him the job in the first place. What was going on there (with both parties) is anybodies guess, but results have shown the error of their ways.

For football to maintain a strong following in Japan, I feel it’s important for the national team to do well. Sadly with Zico at the helm, I just can’t see this happening. And with a relatively easy qualifying route to Germany 2006 now looking like a real challenge, the heat is on.

He may prove me wrong. And for the sake of Japanese football I sincerely hope he does. But there are going to have to be some changes. Major ones. 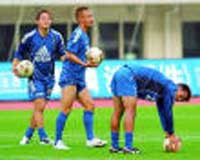 The picture above was surreptitiously taken at a secret training session. Hence the rather poor quality. Now I could make a comment about the team, players, and fans getting royally shafted, but I’ll refrain from such base humour.