Considering the job they do, one would presume that elementary school teachers are blessed with at least a modicum of intelligence. However an unnamed 41-year-old instructor from Okayama Prefecture has been suspended for sending text messages to two Junior high school girls he used to teach.

Whilst such behaviour is admittedly not a crime in itself, it probably is when the messages contain obscene words and focus on the size of the girls’ breasts. Especially when actual mammary measurements are requested. 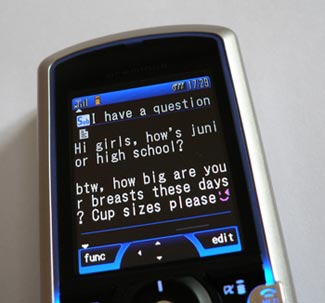 It goes without saying that the girls were more than a little shocked by these inappropriate inquiries, prompting them to ask the texting teacher to stop. A move that unfortunately had no effect whatsoever, and the messages continued — although what further tactless topics were broached hasn’t been disclosed. The refusal (and its subsequent disclosure) leading to the teacher’s eventual suspension as previously mentioned. The punishment being for the duration of six-months, although whether with or without pay is unknown.

Needless to say the culprit was full of remorse for his actions, saying, “I knew it was an act unworthy of a schoolteacher, but I did it anyhow. I deeply regret what I did.”