Chess renegade Bobby Fischer (who is in an Ushiku detention centre while he fights a deportation order issued August 24th) has countered claims in Time magazine that as a fugitive he â€œmight not sound like Mr. Rightâ€ to any potential love matches.

Alluding to the commonly held assumption that the possession of big feet means that a certain other body part is of equally enlarged proportions, boastful Bobby declared, “I wear size 14 wide shoes. Just keep that in mind when you say I’m not a dreamboat, or not Mr. Right.”

And if that wasn’t enough confirmation that he is more king than pawn, the chess champion recalled a visit he made to a public onsen (bath). A tale that he was at great pains to point out is entirely true.

Miyoko Watai, Fischer’s chess playing fiancÃ©, was waiting in the lobby for her well-hung hero, when she heard two men commenting on an enormous member they had seen on a fellow bather. Then when Fischer himself strutted out, the two men apparently pointed at big boy bobby and said, â€œHey, it’s him.â€ An incident that Fischer claimed was very embarrassing for his fiancÃ©. Although perhaps not as embarrassing as having the tale retold to the assembled media. 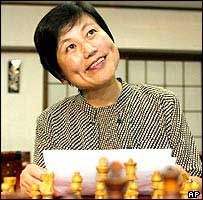 The future Mrs. Fischer eyeing up the goods yesterday.