Perhaps taking the government’s casual cool biz campaign a little too far, a Hyogo Prefecture bureaucrat stepped out last weekend sporting a wig and miniskirt. A not altogether objectionable outfit it has to be said, although on a 56-year-old male it could be regarded as unconventional — risquÃ© even. 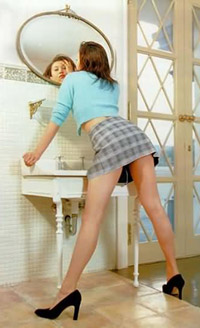 not the man in question apparently

Still, Hiroshi Ikeuchi’s Saturday night out wouldn’t have raised much more than a few eyebrows if he’d just gone quietly about his business. Yet feeling a little giddy in his gutsy garment, the general affairs manager inexplicably opted to expose his genitalia to three female students. The skimpy nature of his outfit presumably facilitating this bit of furtive fun.

Appalled at what they saw however, the three young women overpowered Ikeuchi-san as he tried to demurely depart and handed him over to the local police. The resultant arrest prompting a clearly shocked city mayor to say, â€œIt was an act unworthy of a public servant, and I express my heartfelt apology.â€ A comment that Ikeuchi may not necessarily agree with, as the fashion conscious felon calmly claimed, â€œI was steeped in a sense of freedom.â€