Despite early concerns, the Aichi World Expo continues to be a roaring success. The huge number of visitors ensuring that the queues to see any of the attractions are immense. Making the site a veritable home from home for visiting Tokyoites.

In fact the Expo is so busy, that a group of five people hoping to make a pornographic film there, had to abandon their original idea due to the sheer number of tourists milling about. Instead, they took to the cable car and attempted to make the most of a five-minute journey. Enough time, personally speaking, to easily get the job done. With perhaps even a little time left over for a relaxing post-coital cigarette. As long as smoking is permitted of course. 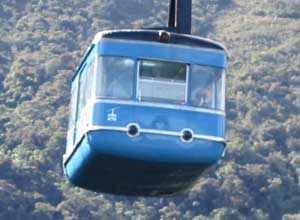 Those involved however weren’t quite so quick off the draw, as the footage later shown on a pay-per-view satellite channel only showed, â€œan actress exposing her upper body and an actor touching it inside the gondola.â€

The screening of the ‘gondola scene’ however got the furtive five in trouble with the law. An eagle eyed — and quite possibly disappointed — viewer spotting the location and alerting the police.

All the crew and cast it appears are from Tokyo, but their names have been withheld as the crime is considered a minor offence. The probable sentence being up to 30 days in jail, or more than likely a fine of just 10,000 yen (50 pound).

In their defense, it has to be said that the hour-long special that contained the clip wasn’t all sleaze. No, with so many non-Japanese visitors and staff at the Expo, the cast bravely made an attempt at international understanding and communication. Several of them being filmed running up to foreigners and asking them smutty questions.

Programmers at the BBC take note.