Jack Bauer’s skill at catching criminals in the TV series ’24’ often verges on the superhuman. Yet even these talents pale into insignificance when compared to the CTU hero’s ability to go without nourishment, and at the same time resist the need to empty his bladder and bowels.

Jack’s food and faeces related feats however can now be explained — sort of. Secretive nibbles of the Japanese dieting product Calorie Mate appear to be what maintain his energy levels; and the snack’s meagre size presumably negates the need for a toilet trip – regardless of how long a day it is.

Clicking on the image below will take you to the truly awful Calorie Mate commercial currently being shown in Japan. Exposing Jack’s furtive feasting, and something he will presumably not want ‘patching through’. 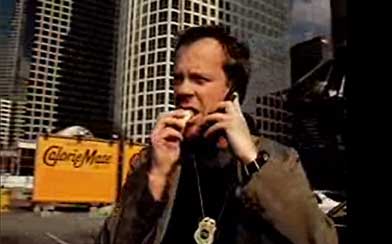 So that’s the eating and excrement puzzle solved. However urination — or more accurately the lack of it — remains a mystery. An issue made even more intriguing by the fact that Jack is also advertising the Calorie Mate jelly drink. Doing so by inexplicably running through a packed train which he appears to have mistakenly entered via the women-only carriage, as all the commuters are young and attractive schoolgirls. 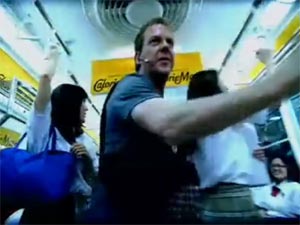