For those looking for a Valentine’s Day alternative to flowers or fancy foodstuffs, the Sankt Gallen Brewery has kindly produced a chocolate beer, the special edition brew going by the rather grand name of ‘Imperial Chocolate Stout’. 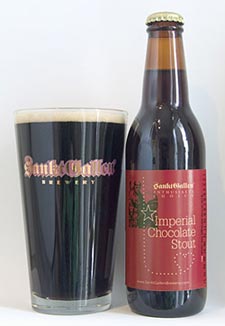 Supposedly made with a generous amount of chocolate malt, the manufacturer claims that the stout has a mellow, sweet taste, and is rich in flavour compared to average, non-imperial beverages.

However whilst hardened boozers might try and dismiss this limited edition offering as nothing but a namby-pamby gimmick, an alcohol content of 8% puts it in the arena of the ‘street drink’. Meaning carefree quaffing could quite easily lead to a decidedly less than amorous evening.