As an Englishman, I have no problem whatsoever classifying darts as a sport. And whilst the rather portly proportions of many of its stars make it an easy target for criticism, the skill and dedication required to master the game is undeniable. In many ways making it very similar to that other giant of the competitive world, snooker.

Yet the smoky, barroom image of darts — along with the rotund nature of its protagonists — has been conveniently erased from the new and trendy electronic version spreading rapidly throughout Japan. In fact, this high-tech form is so far removed from the sport’s origins that it’s being laughably labelled as ‘sexy’.

A word that is seldom banded about when talk turns to the facial hair and physique of British darts legend Andy ‘The Viking’ Fordham. 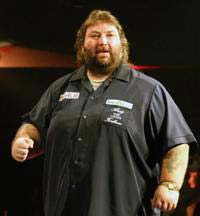