Yesterday, Business Design Laboratory Co (maker of the Hello Kitty robot) released the ifbot, a 45-centimetre robot designed to converse with the elderly. 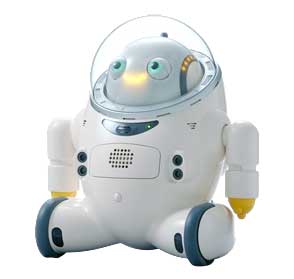 For reasons unknown, the little chap is kitted out in an astronaut suit, whereas considering its target audience, a dirty old cardigan and food-stained shirt/blouse would have perhaps been more appropriate. But on the other hand it does have a glowing face (which I’m presuming is good). And as far as conversational competence goes, the ifbot has a similar ability to a 5-year-old, which is said to be just enough to help stave off senility.

As an example of the robot’s capabilities, given the question, “Today I’m in bad health,” the ifbot responds with, “Perhaps you are overtired. Why don’t you rest today?” And using its internal clock, it can join in a conversation about the weather by knowing what season it is. An absolute necessity it would seem when dealing with the weather obsessed elderly.

Combined with these conversational skills, the ifbot is also programmed to keep the aged healthy and their minds active, and as a result has a large repertoire of songs, quizzes, and old news stories. Although whether the perennial pensioner favourite bingo is amongst them wasn’t disclosed.

Also not mentioned in the ifbot’s design specs is the ability to respond to its owner’s everyday moans and complaints. And with a price tag of a pension busting 576,000 yen (2,900 pounds), its owners will certainly have something to grumble about.