After extensive research, condiment maker Ajinomoto has found that only a meagre 20 percent of married women follow traditional etiquette standards in relation to the laying out of eating utensils. The shocking discovery being made after 235 respondents were asked to provide two pictures. One of an evening meal they had prepared during the week, and another of a dinner they made at the weekend. 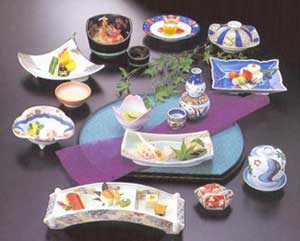 Proper etiquette (which I’m sure the majority of you are acutely aware of) dictates that the rice bowl be placed on the left, and the soup bowl on the right. But the photographs Ajinomoto received proved that many women showed scant regard for such customs. And if the misplacement of bowls wasn’t bad enough, chopstick positioning was even more haphazard. Instead of being placed horizontally in front of the eater, with the wider of the two ends on the right, they were spread seemingly willy-nilly over the table. Some women placed them on a stand, others had them resting on dishes, and rather shockingly, 2 percent of respondents lined the eating utensils up vertically. Yes, vertically!

Yet whilst such etiquette errors can perhaps be excused to some degree due to busy schedules and irregular eating habits, even the simple act of serving beverages was muddled by the majority of those observed. Instead of waiting until the end of dinner to serve drinks as tradition demands, most women served them at the beginning of the meal. And scandalously, 20 percent of families had to endure drinking green tea out of mugs, rather than from refined and respectable cups.

Arguably the only positive note from Ajinomoto’s findings is that 24 percent of families enjoyed eating dinner on a cloth covered table, with a further 8 percent having their dining experienced enhanced by decorations such as flowers or a plant. But even this encouraging sign was tempered by the fact that 27 percent of respondents subjected their family to a meal served on a table festoon with objects such as personal computers and power cords.

A disgraceful state of affairs it has to be said, and one the participants should be thoroughly ashamed of.