Not wanting to be outdone by Sony’s QRIO and Honda’s Asimo, Hitachi has joined the mechanical melee and produced a robot of its own. 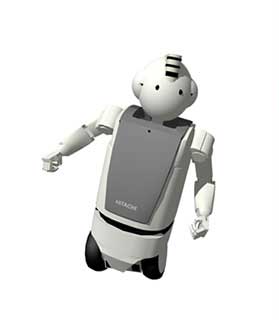 This latest member of Japan’s rapidly growing robot population goes by the name of EMIEW, which stands for, â€œexcellent mobility and interactive existence as work mate.â€ The 130-cm-tall machine apparently has the ability to avoid obstacles, respond to simple voice commands, and also read the weather forecast. And whilst it has been developed for the upcoming Aichi World Expo, Hitachi officials have said they hope to be renting or selling such robots in the relatively near future.

Yet is it possible that all this talk of interactive existence and excellent mobility is merely a cover for more sinister activities? As during a demonstration in Tokyo on Tuesday, reporters were told not to touch the robot. Similarly they were asked not to use a camera flash from certain angles, and in no circumstances were they to cross a white line that had been marked on the floor.

Hitachi’s thoroughly unconvincing excuse is that such precautions are merely for safety, as EMIEW has only just been developed. But the look of absolute fear on this Hitachi employees face as he is confronted by the robotic rogue hints at evil EMIEW’s malevolent menace. 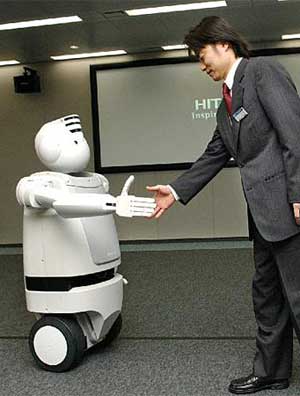