Given that approximately 96.37% of Japanese television programmes have a food-based theme, it should come as no surprise to anyone that certain individuals have started the practice of designating days to individual dishes. And to get the ball rolling, October 30th will now forever be linked with ‘tamago-kake gohan’ — a splendidly simple rice and egg dish. Its uncomplicated nature encompassed in these four easily manageable steps: 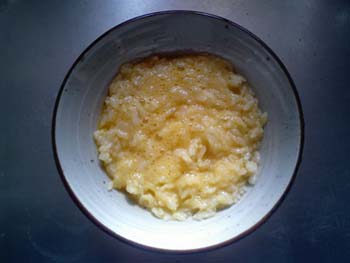 The surprisingly well supported tamago-kake symposium was held in Matsue, Shimane Prefecture, where participants passionately discussed the merits of the gooey egg and rice combination. Plus as hard as it is to believe, proceedings were spiced up even further with an award ceremony; a member of the group being honoured for managing to eat tamago-kake gohan for 30 straight days. And before any passerby got the chance to yell ‘cholesterol’ or ‘salmonella’, the prize winner enthusiastically explained that whilst he began tiring of the taste after only 10 days, by adding a nutritious (yet undisclosed) tonic to the soy sauce, he was able to infuse the dish with a bit of variety and soldier on for the remainder of his challenge.

Warming to his topic, the egg enthusiast continued to wow the crowd by confessing that on the last day he added beer to the concoction — making it into a celebration of sorts. Finally rounding off the spellbinding story by proclaiming, â€œThe tastiness of tamago-kake gohan is universal.â€

A statement that could probably be deemed as something of an exaggeration.