Japan’s ultra-competitive world of grilled chicken production took another twist over the weekend, when the town of Hidakagawa, in Wakayama Prefecture, reclaimed the honour of holding the world record for the longest piece of grilled chicken (or yakitori) — a title that was controversially won by the residents of Kawamata back in August last year, a mere 12 days after the good people of Hidakagawa had first been crowned chicken champions with an effort of 11 metres and 7 cm.

So this year, in a bid to make sure they don’t fall foul of the same misfortune again, the town in western Japan callously killed a whole glut of chickens to produce a gargantuan grill measuring a gut-busting 16.46 metres. 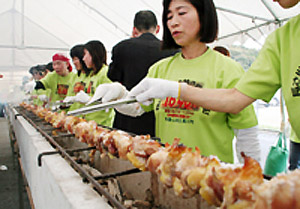 However cruel chicken-based taunts by the champs in reference to the size of Kawamata men’s ‘cocks’ has not surprisingly ruffled more than a few feathers, leading many to believe that the title may once again change hands in the not too distant future.