Despite Japanese food being healthy, and the majority of its people very much on the svelte side, eating competitions are an incredibly popular form of entertainment here. Whether it is a live event or a televised show, these galas of gluttony have a strong and enthusiastic following. And having watched a few such shows on TV, I must admit that in a bizarre and at times disgusting way, they do make for compulsive viewing.

That’s not to say that Japan has a monopoly on such activities. Coney Island’s hot dog eating contest for example gets worldwide coverage. Although for the last 4 years the winner has been Japan’s Takeru Kobayashi. Who for anyone interested produced a new world record at this year’s event. The Tsunami as he’s known managed to wolf down a gut wrenching 53.5 hot dogs and buns in a mere 12 minutes. 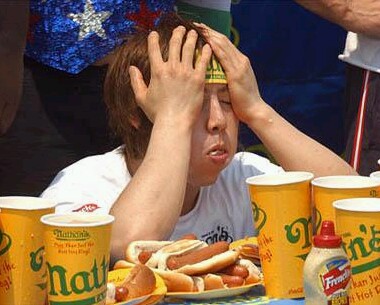 But a noodle and bread-eating contest held in Hyogo prefecture on Saturday ended in tragedy. One of the contestants, a 38-year-old woman, had trouble breathing whilst eating bread, and to the shock of the watching crowd fell unconscious. However despite being taken to hospital, the woman tragically died 9 hours later.