The new model has an increased number of joints in its arms and legs, giving the diminutive robot more human-like movements. Plus sensors in Asimo’s head enable it to detect and avoid obstacles.

But perhaps the biggest advancement is in speed. Asimo’s walking pace has jumped from a painfully slow 1.6 km per hour, to a rather more respectable 2.5 km. And the robot is now able to run. Clocking in with a top speed of 3 km. 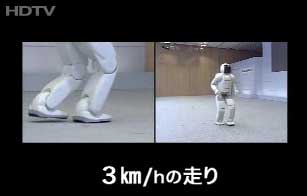 Yes, a measly 3 km per hour! Even I can run faster than that. Although it has to be said that the noise from Asimo’s mechanical movements is considerably quieter than my gasping and wheezing.

Plus it looks like the little fella has substantially more success with the ladies too. 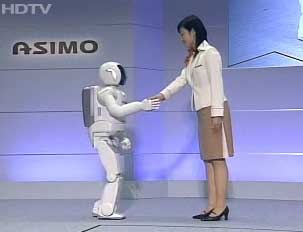 For those of you with broadband, clicking here will allow you to see footage of Asimo in action.