Robot development firm ZMP Inc unveiled nuvo over a year ago. When at the time it was just another experimental endeavour (although admittedly with claims of future mass production) in an increasingly competitive field.

But ZMP has been true to its word, and nuvo is set to become the first robot launched for home use. And for the princely sum of 588,000 yen (2,940 pound), you can have the pleasure of welcoming nuvo as a new houseguest. 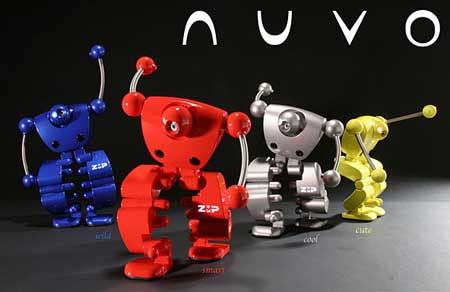 As well as pottering aimlessly around one’s home, the 39-cm-tall robot features remote control technology and can react to human voices. For example, uttering the word â€œActionâ€ will prompt the little chap to stand up. And if that wasn’t enough, nuvo is equipped with a camera, and can take images of the surrounding area and send them to a mobile phone. Allowing its owner to check that Yes the oven has been turned off, and No the front door hasn’t been left open. Providing of course that the kitchen and entrance aren’t too far apart, as the short-legged sentinel only lasts one and half hours per charge.