With mentions of Metabolic Syndrome now a media mainstay, drink makers would appear to be pulling out all the stops to make their beverages seem beneficial, with even knocking back the booze offering at least a nod towards nutritiousness.

For drinks giant Suntory, however, sensing that there’s at least some sustenance in what one is supping is obviously nowhere near as good as seeing it, so Capsela is crammed full of capsules, that in turn are packed with a veritable plethora of vitamins — making it both wholesome and hypnotic. 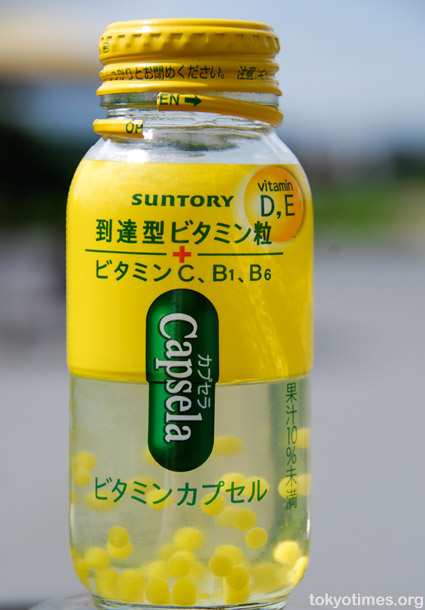 And, what’s more, it doesn’t taste too bad either, in its weak, lemon-like way. The only problem being, for me at least, is that the capsules remind me of fish eggs, which I’m not overly fond off at the best off times, and especially not when bunged in a beverage. Otherwise it’s fairly good, in a floating fish egg fashion.

Young Keiko Kitagawa on the other hand seemingly has no such concerns.