The Japanese fondness for fads is fairly well documented, with products, places and even people receiving the sometimes dubious merits of en masse mania due to their ‘newness’ or massive media hype.

A perfect example perhaps was the opening last December of a Krispy Kreme outlet in Tokyo’s Shinjuku district. An event that took even the keenest of fad followers by surprise, with huge numbers of people standing in line for hours on end just to get hold of some of the shop’s presumably delectable donuts.

Yet more than eight months later, people are amazingly still at it, with the eatery boldly fending of the usual fickleness of Japanese consumers. Even on a mid-week August afternoon there are large numbers of punters patiently waiting outside in the far from comfortable temperatures just to get their hands on the sweet snacks inside. 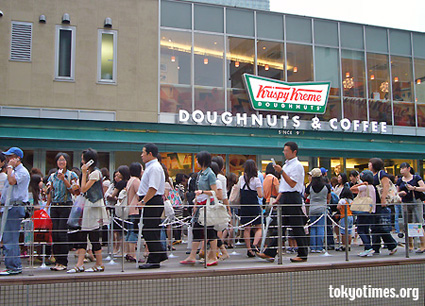 And it’s not a wee wait and then back to the office or wherever to gorge on the goods either, as there’s now a theme park-style sign letting customers know just how long they’ll be in line for. A mere hour it seems being a small price to pay for some sugary satisfaction.

Now by all means call me an old curmudgeon as far as creamy treats are concerned, but isn’t this willingness to wait at least an hour for something as dull as a donut something to worry about?