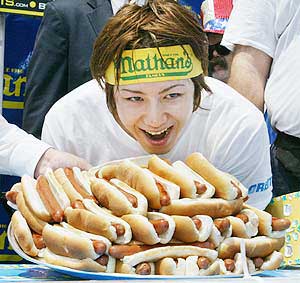 Yet despite dominating the event, Kobayashi was slightly disappointed with his paltry 49 frankfurters in 12 minutes. Well short of the 53.5 hot dogs (and the current record) he managed last year. The gloomy glutton saying, â€œI’m very sad, I came here to beat it. Maybe next year I will.â€

This dedication to the sport is perhaps what makes Kobayashi-san stand out from the crowd; although in Japan he is not alone in the time and energy he devotes to his chosen profession:

â€œFood fighters in Japan think of themselves as athletes. They have a higher recognition of the game and are constantly thinking about records. I probably won’t continue for long because it puts pressure on the body. But I am at the age where I can perform my best.â€

Even this isn’t enough to be a champion though. There is the mental side of competing too. So next time you find yourself confronted with an all-you-can-eat buffet that demands to be devoured, don’t just loosen your belt and hope for the best. Instead, remember these wise words from The Tsunami himself. â€œIt’s how you confront the food that is brought to you. You have to be mentally and psychologically prepared.â€

So there you are. Go and gorge.