The traditional Japanese diet of fish, vegetables, tofu and the like has consistently kept Japanese ladies at the top of the world’s longevity league table, but whilst a gradual change to more western style meals may well reduce these lengthy life spans, it would appear to be having the opposite effect on the nation’s burgeoning breast sizes.

A newly coined look called ‘bon-kyu-bon’ (big-small-big) attests to the size of this phenomena, with Japanese manufacturers now producing bras with less padding for those ladies who aren’t exactly lacking; however for women not quite so well-endowed, help would appear to be at hand with these curve-inducing cookies. 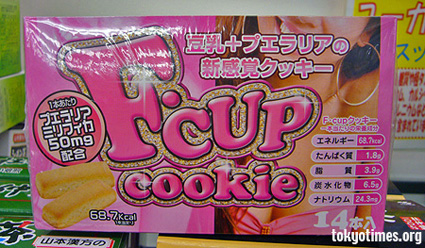 A similar product for men, tentatively titled ‘bulging briefs biscuits’, is rumoured to be ready for release early next year, although some commentators are claiming it may come sooner than expected.