With Japan (and especially Tokyo) being so densely populated, there is a distinct lack of privacy. And for those times when you are feeling a little amorous, there is thankfully no shortage of love hotels.

These can be just basic rooms hired out for a specific period of time. However for the more adventures, there are numerous themed hotels to pick from. Fancy a bit in mock castle, or a heart shaped bed? No worries, as you’ll be sure to find one if you look hard enough. This one relatively near my apartment is a little on the conservative side. It has a nice name though. 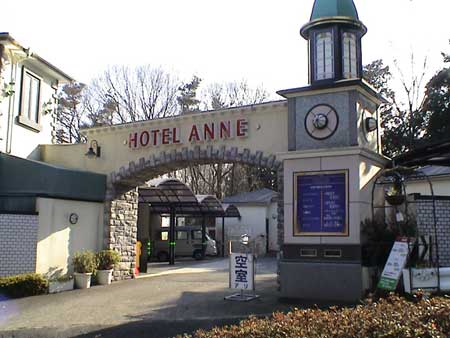 Not only do these hotels provide some much needed privacy, but they also appear to help people get over their inhibitions. As Judging by a recent article in the Mainichi Daily News, love hotels have the ability to bring out the devil in many visitors.

A 26 year-old sales lady told Spa! magazine that â€œlove hotels are all about sex, so my aim is to do it as much as possible. My best record is eight times.”

Eight times. My word! As rooms are hired by set time limits, I’d like to think that she was there for the longer of the two options. Which is rather coyly named stay. Although that’s not as misleading as the short stay, which is preposterously billed as rest. 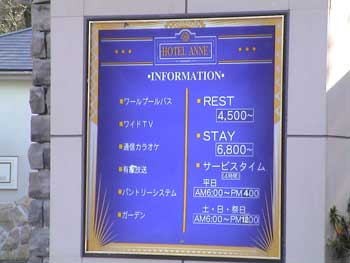 And whilst this 28 year-old hotel goer seems a little peeved by her man’s behaviour, I can see where he’s coming from.

â€œIt’s more exciting when you lock together as soon as you’ve closed the door, instead of trying to be calm about what you do. If the guy suddenly turns on the TV, I tend to think, ‘What the hell has this guy come here for?'”

Fair enough I guess, but what if there’s a big game on TV?