In a bid to promote healthy living and at the same time combat Japan’s growing obesity problems, two Japanese health ministers have started a website to document their fight against getting fatter.

Both Noritoshi Ishida and Keizo Takemi have been diagnosed with so-called metabolic syndrome, which in layman’s terms appears to mean the possession of a big belly – the pair’s relatively ample abdomens having been measured at the outset of the six-month experiment. 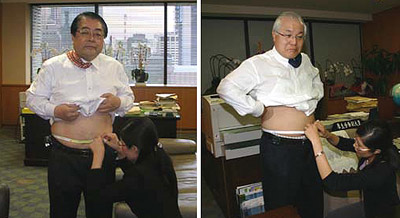 From their comments, the two men seem intent on succeeding, with Ishida-san (left) explaining, â€œI have given myself a challenge and decided to open up the diary of my struggle.â€ The 55-year-old boasting that he will now only use elevators as a last resort, drink just one beer a day, and last but not least, try to walk a whopping 10 minutes a day.

Tubby Takemi is equally gung-ho about getting rid of a bit of girth, although he is well aware of the coming difficulties. â€œI will be under pressure to make a very serious effort, as I love delicious food. But I want to send a message: ‘If Takemi can do it, everybody can’ â€. An assertion that was immediately backed up by the minister’s pledge to practically starve himself by limiting his dessert intake to a measly one helping a day.