The violent and sexually explicit world of manga, and the romantic idyll of Mills & Boon would appear strange bedfellows. But despite their different backgrounds, they’ve decided to get it on. As under the banner of their Canadian parent company Harlequin, Mills & Boon novels have been published in a manga format. 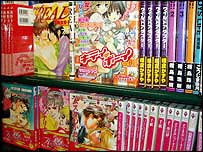 As well as sci-fi, gangster, and pornographic genres, manga has an extensive romantic collection. And it’s here where Mills & Boon is trying to make inroads. The company has had to accept that the younger generation is less willing to read novels, and manga is the obvious answer.

But changes had to be made. Not only in the stories, but in the looks of the relevant characters too. The decidedly different covers for Lucy Gordon’s (apparently) very popular The Sheikh’s Reward shows two distinct approaches. 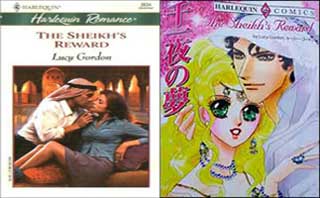 But subtle story changes and big-eyed characters may not be enough to sway many Japanese readers. If Mills & boon is to really crack the Japanese manga market, it might have to significantly ratchet up the raunch factor. Japanese women it seems like their romantic manga to contain explicit sex scenes, and perhaps more worrying for the publishers, love stories between men. So could the Sheikh’s reward turn out to be something very different from what he expected?

Now if Mills and Boon do make such story concessions to please the Japanese market, and it proves to be popular, would the company consider publishing the re-written novels in Britain (or indeed anywhere else in the world)? It would certainly be interesting to see the reaction of all those little old ladies who systematically plough their way through the extensive Mills and Boon catalogue.