Natto is fermented soybeans that have a rather distinct and pungent smell. Add to this a stringy and sticky texture, and it’s not exactly the most appealing food you could think of. 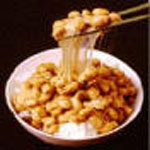 When the very predictable What Japanese food do you like? question rears it’s ugly head (which unfortunately is very often), it’s never long before it is followed up by the even more predictable How about natto?

The Problem is, for the hapless gaijin it’s a no-win situation. Say no and you are greeted with knowing nods and a detectable sense of pride that the foreigner doesn’t like the unique natto. But on the other hand, give an affirmative answer, and you’ll be met with hoots of amusement and surprise. Plus you’ll probably be forever remembered as a henna gaijin (a strange foreigner).

Perhaps the only way out would be to feign ignorance and pretend you have no knowledge whatsoever of the delicacy known as natto. But you’d be lucky to get away with this, and for me personally, having been here 6 years it’s not really an option. I mean, there is even a national natto day, which has the customary attractive models promoting it.