Whilst I was aware that eyelid alteration (from a single to a double) is the most common plastic surgery procedure for Asians, thanks to Popgadget I now also know that nasal bridge raising is second in the surgery stakes.

I must say though that it came as something of a surprise, as I always thought that the numerous comments I’ve had about my tall nose (yes, a nose isn’t big, it’s tall) were derogatory. Or at the very least my, ahem, noble nose was an unlimited source of mirth and merriment. And the fact that kids in kindergarten often refer to me as Pinocchio has only helped cement such feelings. Cheeky little bastards!

But enough of my nose related angst. Asians do want bigger noses, and if they didn’t, why would a Japanese professor have come up with a nasal bridge raiser? A gadget that supposedly produces a tall nose without the need for surgery. 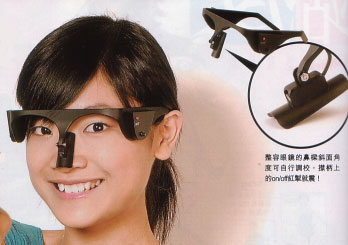 The device has a polythene nose piece that vibrates at 7,000 Hz per minute, supposedly creating a gravitational force that excites the growth of the nasal bridge. And its promoters claim that wearing it everyday for 3 minutes or so will produce noticeable differences in just 2 or 3 weeks.

If you find this hard to believe, these thoroughly unconvincing before and after pictures probably won’t change your mind. 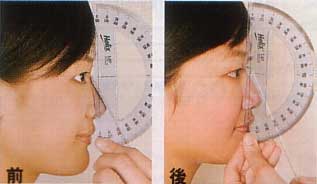 For those of you also sporting prominent noses, I’m sorry to say that despite extensive and overly optimistic research, I’ve yet to find out if the device has a reverse switch.