Forget your impressive but decidedly diminutive robots such as Asimo, EMIEW, and nuvo. Instead, welcome the new titan of robot technology: The Land Walker. 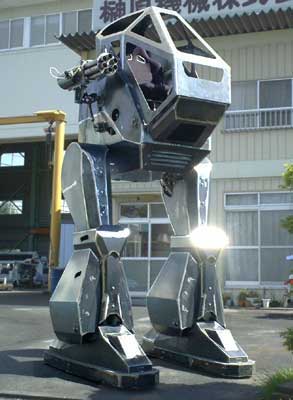 This colossal beast stands an impressive 3.4 metres high, and weighs a whopping 1-ton. Plus, with the use of four pedals in the cockpit, it can be manoeuvred forward, backward and sideways, although admittedly it’s not what you’d call swift, strolling at a somewhat sedate 1.5 kph.

However, any concerns about speed can be instantly dismissed by the fact that the Land Walker is equipped with two air guns positioned next to the cockpit, allowing the driver to fire sponge bullets at flabbergasted onlookers who dare to mock the machine’s lack of pace.

The robust robot was designed almost single-handedly by 32-year-old Masaki Nagumo, who works for the company Sakakibara Kikai, based in Japan’s Gunma Prefecture. Nagumo’s aim it turns out was to develop a device like those in the anime series Mobile Suit Gundam, saying, â€œI wanted to see a robot on which people ride and operate, like Gundam.â€ 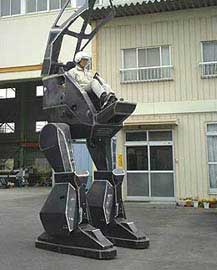 For other Gundam fans, Sakakibara Kikai will happily make the Land Walker to order. The only stumbling block (apart from shipping I suppose) is that it costs a cool 36 million yen (180,000 pound). But fear not those on a tight budget, as the company says the price will be lowered if enough people place orders.