Another new robot is about to be produced in Japan, this latest one by Tokyo based ZMP. It goes by the name of nuvo, hence the corny title to this post. Which seemed quite clever when I first wrote it. 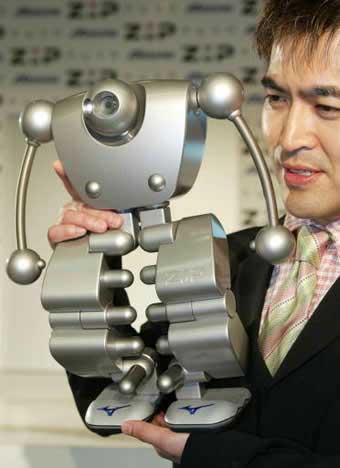 Whilst a bit on the short side, coming in at only 39 cm’s, nuvo is a clever little thing. It can walk on two legs, and then pick itself up when it falls over. Which I’m guessing is quite often, as this seems to be a big selling point. And if that wasn’t enough, it also recognizes voice commands such as advance and stop. Unfortunately there’s no mention of whether it knows left or right, so movements could be somewhat limited!

As well as walking (and of course picking itself up), nuvo also has the ability to relay images of its surroundings to a videophone. Although presumably this will be just what’s directly in front of nuvo, and due to its lack of height, all things under 39 cm’s. So you can look forward to lots of shots of people’s slippers, and now and again the carpet, as nuvo picks itself up after a fall.

I presume by now that you can’t wait to get your hands on one of these little beauties. And if you’ve got 500,000 Yen (2,480 Pounds) to spare, you’ll be all set when they go into production.