As well as potentially costing him his freedom, Masashi Kamata’s shoe obsession looks to have also costs him a considerable amount of money, as the footwear fiend had to resort to renting a warehouse to store his vast glut of ill-gotten gains. 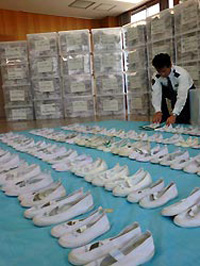 Arrested back in September for the theft of just two pairs of indoor school shoes, it appears to have taken until this week for the police to unearth Kamata-san’s astonishing collection, with local officers confiscating around 5,000 pairs of children’s school shoes from the warehouse.

Seemingly unfazed by the find, the 28-year-old attempted to explain his behaviour by telling investigators, “I was enjoying their smell. Indoor shoes for school sexually stimulate me. I couldn’t throw away the shoes I obtained.”

Rumours that Kamata is eagerly looking forward to developing a similar penchant for prison-issue pumps have yet to be confirmed.