When it comes to gadgets I find it very hard to resist, and if it wasn’t for the hefty price tag, I’m sure I’d have been the proud owner of a Sony Aibo a long long time ago. When it comes to animals though, a lot of people feel that having a robotic pet is odd to say the least. And so wouldn’t even consider getting one. 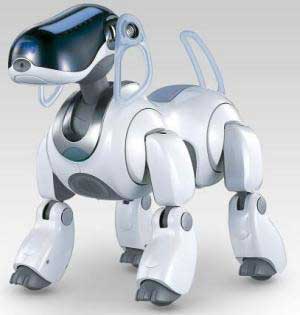 Now I’ll readily admit that pretty much all the points put forward by those supporting real pets over robotic ones are valid, and I can’t really argue with any of them. But this picture I saw yesterday of some hospitalized kids playing with an Aibo proves that such pets aren’t all bad. The sheer joy on the children’s faces is there for all to see. 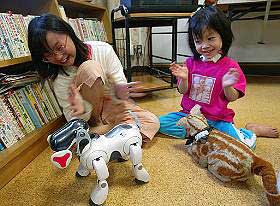 But before I get uncharacteristically sentimental, I should move on and say that the use of robotic pets in Japan is not just restricted to kids. Professor Toshiyo Tamura has done extensive research on the effects of robotic therapy on elderly patients, and he has found that whilst useful, older people prefer robots that are furry and huggable. So as you can see from the picture below, the professor has got around this problem by wrapping an Aibo in a cuddly little coat. 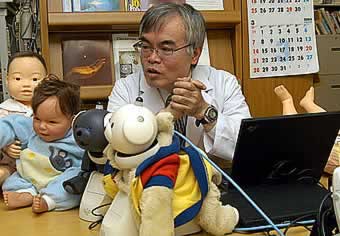 But for his patients’ sake, I hope he doesn’t intend using those scary looking dolls on the left as part of his research. Just looking at them makes me feel uneasy, and I don’t care how furry their coats may be, I certainly wouldn’t want to be hugging one those devilish looking things. Especially if their eyes move!