It may not be an image of Buddha on a piece of toast, or even a likeness of the consummately coiffured Prime Minister in a blob of hair mousse, but this crane in a watermelon radish must surely be worth a bob or two on eBay. 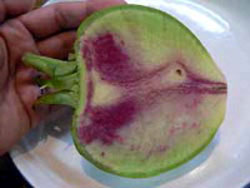 The unusual discovery was made by Noriko Sasaki in a restaurant she runs in Osaka. The 61-year old explaining that the bird appeared very clearly, with even a hole in the perfect place for its eye.

Needless to say the rare radish garnered a lot of interest from excited diners at the restaurant. Some saying that if Sasaki-san had cut the radish in a different place the image wouldn’t have appeared. Others getting rather carried away, claiming an entirely different image may have revealed itself.