News-starved residents of Tokyo are currently going crazy over the appearance of a ‘daikon’ (Japanese radish) in the city’s Higashikurume district, the robust root vegetable miraculously pushing its way through the asphalt by the side of a road. 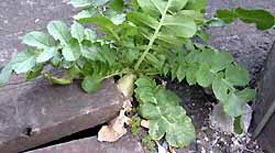 The radish’s emergence in an urban area without a hint of greenery has needless to say surprised many locals, with a Government official speaking for the majority by excitedly exclaiming, â€œI have no idea how the seed got here.â€ Yet sporting leaves that span the width of a human hand, and boasting a respectable diameter of 4 centimetres, the dynamic daikon can even be seen from the road, immeasurably brightening the morning trips of thousands of commuters.

This daikon dementia follows a similar incident in Aioi, Hyogo Prefecture, where an equally courageous radish recently appeared — local residents even going as far as naming it ‘Dokonjo Daikon’ (gutsy radish). A heartwarming tale that ultimately ended in tragedy, as a callous criminal sliced off the top of the vegetable; however its remains were rushed to a nearby agricultural research centre, where officials are still trying to bring it back to life. Town spokesman Jiro Matsuo tearfully stating, â€œPeople discouraged by tough times were cheered by its tenacity and strong will to live.â€

Yet if the unthinkable happens and the daikon dies, it will continue to live on, its story having been painstakingly immortilised in a 48-page book; a project in no way designed to cash in on the radish’s tragic story, with an Aioi Municipal Government official claiming that with ‘Ganbare Dai-chan’ (Hang in there, little daikon), “We want to reproduce the radish and add a new page to its history.” Author Ayumi Miyazaki, who laboured for a full two months to produce the masterpiece, also adding that she hopes the book will leave a lasting impression of the radish as it grew through the asphalt. 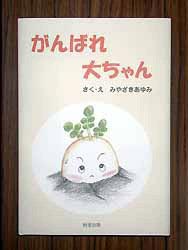