On Thursday, the Tokyo police sent papers to prosecutors on a businessman’s use of the U.S. made Segway on a public road. During a promotional event, the 42 year-old import company president drove the Segway along Takeshitadori Street, in Tokyo’s fashionable Harajuku district.

Not a major crime you’d think, but the Segway is classified as a motorcycle under Japanese law. And as it’s not sufficiently equipped with brakes, lights, and indicators, it’s illegal. This means that the Segway can only be used in parks and University campuses.

An imported Segway costs somewhere in the region of 850,000 Yen (almost 4,400 pounds). It has to be said, that’s a lot of money for a quick race around the local park. 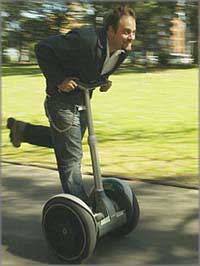 A man speeding away from the police yesterday