The obsession in Japan with pilfering, purchasing, or peeking at schoolgirls underwear is relatively well documented. Well, it is on this site anyway. But in a slight break from convention, a foreign non-schoolgirl has come to the attention of the nation’s panty perverts. And perhaps surprisingly, it’s all thanks to tennis.

The women’s game is relatively popular in Japan, but audiences are mostly made up of ardent female sports fans. Or perhaps that should be were. As this year’s AIG Japan Open has changed all that. Attendances swelled to around twice their usual size, with 70% of the ticket buyers being male. The vast majority of these fans armed with every photographic device known to man.

Yes, Wimbledon champion Maria Sharapova was in town, and the chance of a peek at her panties was an opportunity many underwear aficionados were simply unable to resist. The finesse of the tennis star’s backhand or the power of her volley was irrelevant to the camera-carrying horde. Her underwear-revealing serve was all (and everything) they had come to see. One reporter even grumbled that, “when she served, everyone got ready to take photos of her panties. Nine out of ten of these guys were geeks whose cameras were aimed below the belt.” 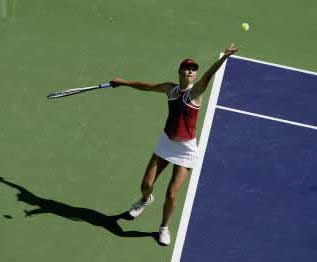 Entertainment journalist Yuuichi Hirabayashi attempted to explain the phenomenon, although it has to be said with perhaps a little too much enthusiasm. “She’s the kind of Caucasian beauty that Japanese people have long admired.” And having warmed to the topic at hand, he went on to say that, “Tennis players usually become muscular, but she doesn’t have that gnarled look. She’s slender in a way that doesn’t make you think she’s an athlete.”

It’s not surprising then that the internet has spawned numerous sites devoted to the sharing and swapping of Sharapova shots. A writer specializing in internet related issues said that the sites not only offer panty pictures “that are taken from all sorts of angles,” but also numerous “photos showing her nipples when she isn’t wearing a sports bra.”

Thankfully the young Russian seemed unaware of the ulterior motives of many of those watching her games, but she is said to have complained to her staff at the cacophony of camera shutters that accompanied her every move (and serve). If she plans on playing in Japan again though, it would appear it’s something she is going to have to get used to.