Fresh from its success with the colourful and cute SushiDisk, Japanese company SolidAlliance has just released the GhostRadar. 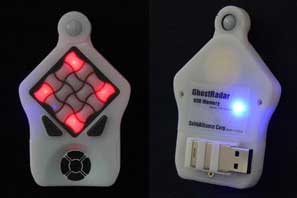 This rather bizarre looking contraption contains a USB memory stick, and as its name suggests, a ghost detector too. Company Vice President Yuchiro Saito says the device is suited for spooky late nights alone at your computer.

In a place that’s haunted the GhostRadar can be expected to beep every hour or so. But in other places it will rather disappointingly fall completely silent.

And in a desperate attempt to add interest and intrigue, Saito-san went on to say that the GhostRadar â€œdetects invisible phenomena and so the system is confidential. This is not a game. This is a measuring device.â€