A few weeks ago I wrote about a gyudon restaurant owner who was arrested on suspicion of killing a complaining customer.

Earlier this week a few more details about the case were released, and 26-year-old Katsuhisa Ukon was officially charged with murder.

It seems that the murdered customer was especially vociferous and persistent with his complaints. At one time even moaning that the rice in packed meals was leaning to one side. Now regardless of how big a rice fan you are, I think that has to go down as somewhat on the petty side. In fact I wasn’t even aware that rice could be accused of leaning.

Whether it can or not remains unproven, but Ukon-san obviously thought the complaints were excessive. Even after being officially charged with murder he remained unrepentant. When questioned over his motives, he told police that, â€œI thought this world would be better off without him.â€

And all over a bowl of this. 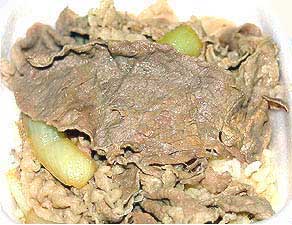