Not content with making the bathroom a place for the leisurely perusal of poetry, toilet trailblazer TOTO has produced a lavatory with a built-in music player.

As well as the now almost standard wash and dry facilities, TOTO’s unusually named Apricot N5A has the ability to bang out a few tunes, whilst you, erm, bang out other things. A company spokesperson saying, “We conducted a survey in 2002 where we asked people to tell us what they wanted from a toilet. The most common response was a heated water cleaning system, which was closely followed by the desire for audio-visual functions.”

Yet don’t for a minute think that this means some kind of cheap stereo with an inbuilt muzak soundtrack. Far from it. The inclusion of a memory card slot means that users can set the music to suit their needs. A couple of short and snappy pop ditties could be ideal backing for an equally brief ‘business trip’. Alternatively, a 1970’s prog rock marathon would perhaps be better suited to those looking at a more prolonged visit. The addition of volume control allowing any embarrassing splashes or splatters to be easily drowned out by a timely cymbal crash or screeching guitar solo. 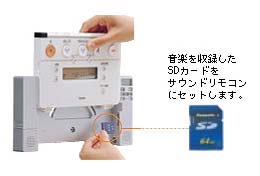 With the Apricot N5A however, the fun doesn’t stop with musical accompaniment. For those whose bowels run like clockwork, the toilet seat can be set to warm-up at specified times. Plus the embarrassment of frantic flushing after a particularly large and stubborn deposit should be a thing of the past, as the intelligent toilet is capable of analyzing what it’s dealing with; taking the appropriate action once dimensions and consistency have been accurately calculated. Yet perhaps the Apricot’s biggest boon — at least for the ladies — is that the seat puts itself down automatically.

Whilst such lavish lavvies may seem a little over the top to some, Kuo Ue, director of the Japan Toilet Association, claims to know why such advancements have become so attractive. “Japanese are a people who have placed great importance on hygiene since the olden days and really focused their attention on the toilet. There’s even a saying that if you want to be beautiful, you should first clean your toilet.â€ Finishing off with a slightly controversial parting shot. “There’s a tendency for toilet talk to be taboo in the West, so they haven’t progressed.”