Naoko Ito, a 60-year-old waitress, used to cringe in embarrassment at the thought that others could hear the sound of her efforts on the toilet.

But for Ito-san (and apparently thousands more like her), help is finally at hand. The fear of people hearing one’s grunts and groans, or splashes and splutterings, have been forever banished by Toto Ltd’s Sound Princess.

A simple wave of the hand over the device’s sensor makes a flushing sound that (unless the user is having a particularly torrid time) masks the sound of their bodily function. Toto claims to have already sold 500,000 Sound Princess units, with orders surging by an impressive 125% in 2003. Company spokesperson Kumi Goto said, â€œJapanese women are very embarrassed by the sounds they make in the toilet.â€ And as far as sales go, â€œthe core of our clientele is schools and companies.â€ 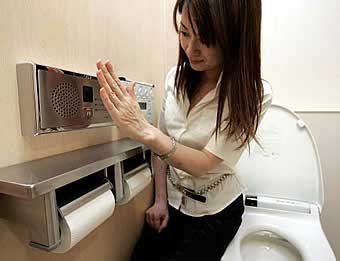 But not only does the Sound Princess prevent women’s blushes, it’s also good for the environment. Without such a masking device, it is from all accounts common for Japanese ladies to (and at times furiously) flush and re-flush the toilet to cover any unseemly sounds. Which whilst quite efficient on the noise prevention front, is not especially good for the environment.

And if all this wasn’t enough justification for the Sound Princess’ existence, parasitologist Noriji Suzuki claims that for a long time going to the toilet has been an embarrassing and shameful practice for Japanese women. The Kochi University professor said, â€œSometimes you see people talking to each other over a stall in the West, but that would never happen in our culture.â€

Up to now though the demand for the Sound Princess has been limited to ladies bathrooms, with Ms. Goto confirming that, â€œI still haven’t heard of men who say that they want a Sound Princess in the men’s room.â€

Maybe not, but perhaps a sister (or even brother) device along the lines of Odour Prince would get my wholehearted support.