The longevity of the Japanese is fairly well documented, but just in case it needed confirming, the nation’s ladies have once again been lauded as the longest living people in the world. An expected innings of 86 years allowing plenty of time to amass absolutely loads of Louis Vuitton luggage, or alternatively suffer an even longer and lonelier marriage.

Japanese men don’t fare too badly either, with a second place spot behind the chaps of San Marino. A fairly substantial average of 79 possibly making up for the oodles of overtime they’ll be required to put in prior to retirement.

Yet despite these impressive numbers, a slowly changing diet is leading to an increase in the number of those overweight. A situation that has even led to fashion conscious fellas grappling with girdles in an effort to fit into some garments.

But that said, compared with many other countries, the Japanese are still super slim. Not that it has stopped many companies from attempting to cash in on peoples’ fears of becoming fat. The far from obese form of this character for a clinic arguably making the likes of Kate Moss look positively lardy. 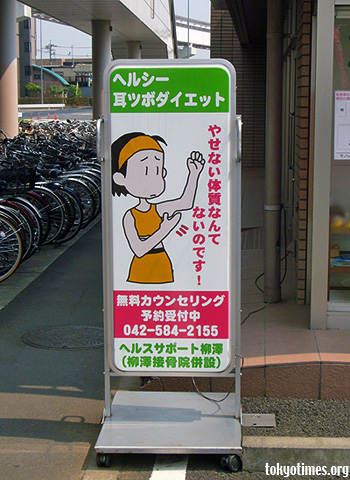