Living in Japan and possessing a singing voice that warrants a stretch behind bars means that evenings out with colleagues or acquaintances can be fraught with danger. One simply never knows if (although sadly it’s usually when) the battle cry of â€œLets go to karaoke!â€ will rear its ugly little head.

This spine chilling suggestion for the vocally challenged requires an immediate and effective escape plan. Perhaps a feigning of tiredness, or even a boldfaced lie involving family members, sickness, and an urgent need to return home. Basically anything will do, as long as it results in a night of karaoke crooning avoidance.

Such cowardice has thankfully served me well up to now, but the evil engineers at TASCAM have released the terrifying Karaoke Man on to a vapid and voracious market. 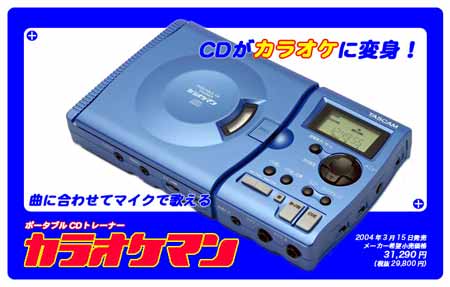 This innocent looking but malevolent device allows users to cut the vocals from any CD. Which combined with the supplied microphone creates a light and portable karaoke machine. A gadget that is destined to appear when least expected and even less desired. 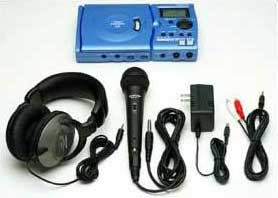 This is a frightening prospect indeed, and one that will require a serious rethinking of evasive strategies. One possibility is the claim of a mysterious yet especially virulent throat condition. A disease so baffling that karaoke singing in any shape or form is liable to be fatal.

Rather extreme I admit, but these are troubling times for a westerner without the ability to warble.