Gyudon (basically rice topped with beef) is a popular cheap meal in Japan, and there are a few restaurant chains that center their business almost solely around it. But the recent ban on imported U.S. beef has meant that many outlets have had to stop selling it.

Unfortunately some customers aren’t taking it very well. Two days ago, 35 year-old Masaaki Mori entered his local gyudon restaurant at 9 am. After swiftly drinking two bottles of beer (obviously an early starter), he ordered a bowl of gyudon. This is when the trouble started, as after being told that the shop had run out of beef, our disgruntled customer kicked up a bit of fuss. Banging his fists on the counter and shouting his displeasure to all and sundry. The man seated next to him told him to be quiet, so our beef loving brawler slapped him on the face, and for good measure grabbed the hair of another customer who tried to intervene.

After his arrest, Mr. Mori told police officers that he â€œthought the restaurant was still serving gyudon. I felt angry as they said it had stopped serving the dish.”

Since the incident, it’s rumoured that the nation’s gyudon restaurants have upped their security to code orange until further notice. 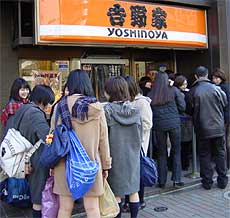 Beef loving customers getting ready for a rumble yesterday